I stood, with tears in my eyes, and listened intently  as my father-in-law sang every word of “Old Rugged Cross”. Why was that such a blessing? This beloved man is 80 years old and in advanced stages of Alzheimer’s Disease. Most days he doesn’t even know who he is.

My husband and I became the caregivers when his wife of 41 years passed away. We had no idea the pain and frustration she was going through and there is not a day goes by when I don’t tell her I’m sorry for not understanding. She was 84 when she passed away and on the day that she drew her last breath I leaned down and looked into her eyes, “You’re tired, aren’t you,” I whispered. She barely nodded her head, but I could tell that she was ready to accept that final rest. 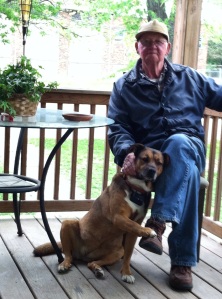 I call him “Pop.” Before he came to live with us I just called him by his name. What is the difference? I feel like I’ve grown to know him so much better now than I did the whole 36 years I’ve been married to his son. It’s a shame that we let so much time go by before we really see the people that we love. We are too busy raising families, working and preparing for a future that wouldn’t even be ours if these precious people had not been a part of us. It’s almost like all the layers have been stripped away and we can see the man. He pats our dog’s head gently as he tells us about the hunting dogs his Dad had. And he laughs when he tells us that they always shot the rabbits, not the dogs.

Then he’ll ask sadly where his wife is and where was he before he came here. We surrounded his room with memories: pictures of his brother and sister when they were younger; his Mom and Dad, and he and his wife. And you should have seen his face when I showed him the high school diploma I found in his things. He told me all about how he had to quit school and go to work in the 10th grade, then while working at Kroger he lived across from Norwood (Ohio) High School so he took night classes to graduate. It took him three years, but he did it. “That is something to be proud of, isn’t it, Pop?” He beamed as he nodded his head, “Yes. Yes, it is.”

We have learned that Pop had a motorcycle when he first went to work. That he delivered newspapers on a bicycle. And when his Dad purchased two horses, he and his brother rode those horses all the way across Knoxville to their home! “Cars kept honking their horns and we just waved,” he laughed. Pop has a beautiful laugh.

Some people don’t understand what happens when a loved one starts living in whatever memories they have. Some people want to “fix” them. I am learning that you can’t fix what isn’t broken. God has allowed my hubby and me to see a whole new side of Pop. It has been an adjustment all around, but I can honestly say that there have been some very good times in the adjustment.

Pop goes to church with us each Sunday and I hold the hymnal on one side and he holds the other. I know that he can’t read the pages, but he knows almost every song by heart. I don’t know what tomorrow holds; my prayer is that we can continue to provide a home for Pop as long as God allows him to live. One thing I do know is that we are blessed to have this moment in time.

This site uses Akismet to reduce spam. Learn how your comment data is processed.

DaySpring Cards for every occasion

Always have a card on hand for any occasion with our Studio 71 Premium Card Boxed Set including a Rose Gold Pen. Shop Now!